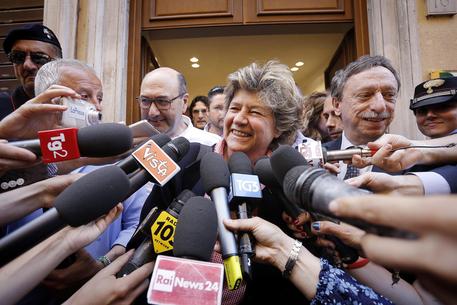 (ANSA) - Rome, May 11 - CGIL trade union federation chief Susanna Camusso on Monday blasted what she said is the government's "arrogance" in dealing with school employees.
Teachers and other school staff staged a nationwide strike with massive rallies in seven major cities last week to protest against Premier Matteo Renzi's so-called 'Good School' reform bill.
"The government's arrogance in negating the reasoning of school workers leads one to suspect that actually they are the ones without a plan," Camusso said.
Her remarks came after Reform Minister Maria Elena Boschi said Sunday she did not think a school system in the hands of the unions could work. She also said that the government was willing to hold talks on its schools bill, which, among other things, increases the power of principals, while stressing that it would be "unacceptable to leave things as they are". "I'd like to tell the minister that this idea of hers that the school system is in union hands is typical of a government that doesn't want to take the country into account," Camusso added.
Former education minister under the last Silvio Berlusconi administration, Mariastella Gelmini, said in her opinion not all the unions are "resistant to change".
Also on Monday, dozens of people identifying themselves as teachers wrote on Premier Matteo Renzi's profile that "we won't vote for the Democratic Party (PD) anymore because we're indignant over the 'Good School' reform bill".