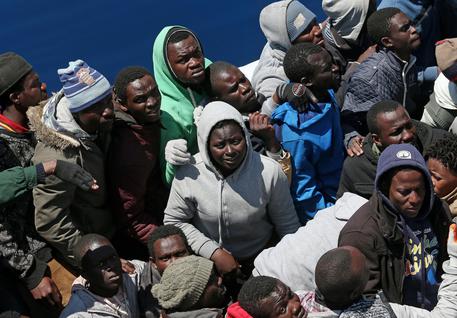 (ANSA) - Rome, May 7 - About 33,000 migrants have arrived in Italy to date this year, a 15% increase over last year's arrivals in the same period, an interior ministry official said Thursday.
And that puts Italy on track to receive as many as 200,000 for 2015 overall, well above last year's 170,000 migrants, said Mario Morcone, head of the civil rights and immigration department in the ministry.
This creates a "very difficult" situation, Morcone told a parliamentary committee on the reception of migrants.
Last year's budget for migrant reception came to about 630 million and will be higher in 2015 due to rising numbers, said Morcone.
Meanwhile, Foreign Minister Paolo Gentiloni told a joint foreign affairs committee hearing that Italy is continuing to work with four other European nations on drafting a legal framework to present to the United Nations on the destruction of boats used by human traffickers.
Gentiloni said that a draft is expected "during the next week".
Some countries have said that measure could help to stop some human traffickers from exploiting desperate migrants who arrive in waves from Africa and the Middle East.
Other countries are helping more and more with migrants, he said, but almost all arrivals are still in Italy because its ports are some of the most southern in Europe.
"So this does not diminish the pressure on our country," said Gentiloni.