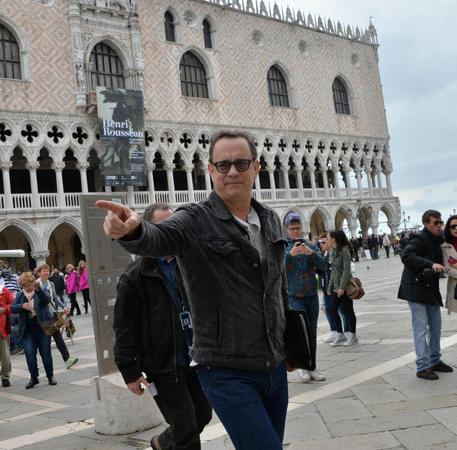 (ANSA) - Venice, April 28 - Filming for the cinema adaptation of Dan Brown's sixth best-selling novel Inferno continued Tuesday in and around St. Mark's Square in Venice.
The film directed by Ron Howard and starring Tom Hanks as professor Robert Langdon largely took place under the porticoes of the Ducal Palace. Hanks then stopped to talk to tourists in St. Mark's Square on his way back to his hotel. On Monday, filming centred on the Rio della Canonica, famous for its Bridge of Sighs.
Based on a screenplay by David Koepp, the film also features Omar Sy, Irrfan Khan, Sidse Babett Knudsen and Felicity Jones, the female protagonist in the Oscar-winning Stephen Hawking biopic The Theory of Everything. Inferno the movie is due to be released in 2016.