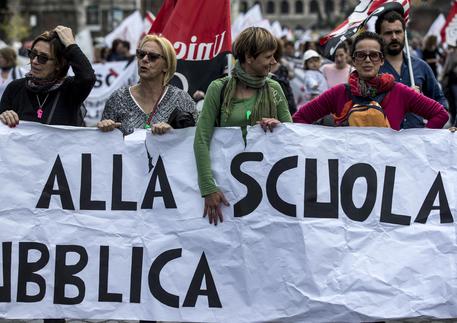 (ANSA) - Rome, April 24 - An estimated 10,000 teachers and administrators rallied against the government's so-called 'Good School' reform bill in Rome on Friday, organizers from USB, UNICOBAS, and ANIEF union federations said.
Participants chanted slogans against Premier Matteo Renzi, Education Minister Stefania Giannini, and the country's "big three" trade union federations - CGIL, CISL, and UIL - whom they accused of selling out to the government.
"We will continue our struggle until (the government) withdraws its 'Good School' bill," organizers said. Today's protest in the capital comes after thousands of teachers dressed in mourning and holding a small light took to the streets in a flash mob in cities and towns all over Italy in protest against the bill, which is now before parliament. The flash mob reportedly took place in "over 100 cities" including Cagliari, Palermo, Milan, Reggio Calabria, Rome, Verona, and Turin.
"In Naples 1,500 of us took to the streets to say that the public school system is dying," said high-school teacher Antonietta Toraldo. "And now we want to be heard".