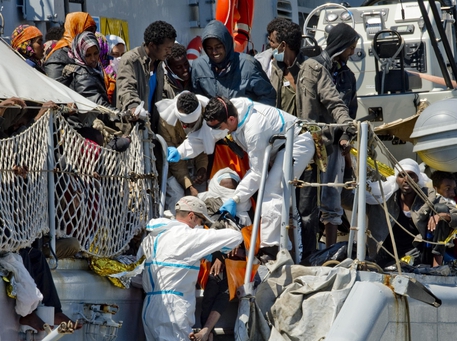 (ANSA) - Brussels, April 22 - Sources said Wednesday the EU is mulling "surgical operations" to prevent people trafficking across the Mediterranean. "It won't be war, but surgical actions," the sources said. "We (must) take seriously Premier Matteo Renzi's proposed destruction of traffickers' boats before they are put to use.
This is one area we're focusing on". Also on the agenda at Thursday's emergency EU summit will be other ways to "destroy traffickers' business model (and) make their lives impossible", the sources said.
This includes using Europol to hunt down and destroy "Internet content and materials traffickers use to attract migrants".
As well, the sources said the summit will likely decide to double the budget for its Triton sea mission and widen its "range of action" - but without changing its mandate.
The Triton operation, run by the EU border agency Frontex, took over from Italy's bigger and better-funded Mare Nostrum search-and-rescue operation last November.
But it was given a different mandate from Mare Nostrum, focusing on border security rather than search and rescue.
Critics have slammed Operation Triton as failing to meet the rescue demands of the thousands of people pouring into Europe each year via Italy's southernmost shores, many of them fleeing war in Africa and the Middle East.