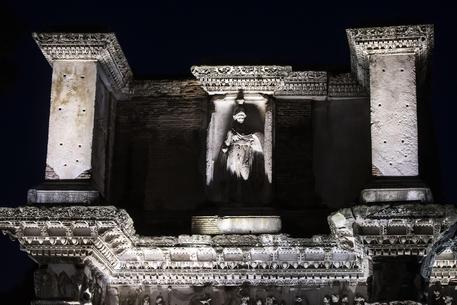 (ANSA) - Rome, April 22 - The Roman forums are now dazzling visitors by night too thanks to new lighting designed by Oscar- winning set designer Vittorio Storaro and his daughter Francesca. The much-anticipated artistic lighting, which debuted Tuesday night to make the archaeological area come vibrantly alive, started at around 8:30 pm local time at the Forum of Nerva, to then reach the Forum of Augustus and Trajan.
"It is a dream come true", said a visibly thrilled Rome Major Ignazio Marino.
"Seeing that location in the dark weighed on the heart because it is an archaeological area that we are the only ones to have worldwide".
Culture Minister Dario Franceschini said at the inauguration: "It is truly an extraordinary thing what the city of Rome did, this work makes the central archaeological area of Rome something marvelous where one can take a unique walk, along the road of of Via dei Fori Imperiali, which is closed to traffic".
"It is truly important that this happens in the evening that closes such an important, historic day in which we signed an agreement between Mibact (the culture ministry) and the city of Rome that will finally lead to sole management after years of lack of communication".
The project of permanent lighting enjoyed the technical support of municipal electric company Acea, with President Catia Tomasetti who explained: "The funds invested in the project come from savings that are manageable". And among the thousands who came to admire the area by night, Vittorio Storaro said: "Enjoy this every night". And festivities for the lavishly celebrated anniversary of Rome's founding in 753 BC on Tuesday - Rome's 2,768th birthday - did not end there. "The long night of the Imperial Forums", as defined by Rome culture councillor Giovanna Marinelli, will continue at least until April 24 when the lighting performance and historical narration of Piero Angela and Paco Lanciano will also debut at the Forum of Caesar. On the same day, the first two columns of the 'quadripartio' that surrounded the Temple of Peace will be unveiled after being restored.
"A Russian donor has agreed to give two million euros to the city, with which we will raise the two columns near the one of Trajan", said the mayor. "In this case as well, we will ask Vittorio Storaro to help with the lights".
Referring to Trajan's column, Marino joked that "not even Emperor Trajan saw it like this, with these details enhanced by LED lighting".