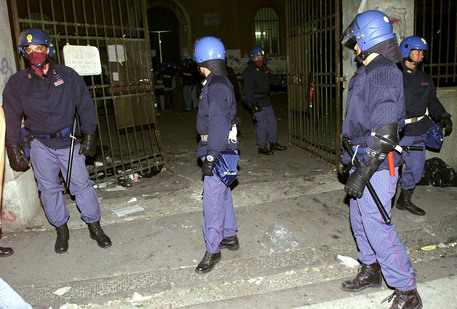 (ANSA) - Rome, April 16 - Fabio Tortosa, the policeman who this week defended the notorious 2001 assault on the Diaz school during the Group of Eight summit in Genoa, is to be suspended from the force, national police chief Alessandro Pansa said Thursday.
"Tortosa will be suspended from service this morning," Pansa told reporters. Tortosa sparked a furore Tuesday when he wrote on his Facebook profile that he was in the unit that raided anti-globalisation protesters on the fringes of the G8 summit and that he would behave the same way again.
"I was there that night at the Diaz. I would go back in a thousand times," he said in the post. The European Court of Human Rights (ECtHR) last week condemned Italy, finding that torture had occurred during the raid. In response, the government sped up a reading of its anti-torture bill, with the Lower House approving an amendment increasing the maximum prison sentence for public officials found guilty of torture from 12 to 15 years. In the night assault on the Diaz school, hundreds of police attacked about 100 activists and a few journalists, wounding 82 and seriously injuring 61 - three critically and one, British journalist Mark Covell, left in a coma with rib and spinal injuries. Officers planted evidence including two Molotov cocktails and hammers and knives from a nearby construction site to justify the raid.
"Today the flying squads and the police are something else, they are different," Pansa said. "We have different models of conduct and operation techniques. "We are the defenders of law and order and democracy... if someone (in the force) does wrong, they will be punished". Tortosa said that he felt like a "sacrificial victim" and is set to appeal. "I'm waiting for the suspension to be communicated to me.
I respect the decision of the police chief, but I think I'll appeal," he said, arguing that he only ever did his duty.
Tortosa won support from several figures on the right of the Italian political spectrum, including Northern League leader Matteo Salvini. "Putting someone on trial for a Facebook post is fourth-world stuff," Salvini said.
"I'm amazed that the police chief talked about his men as if they were butchers. He probably heeded the wrong vocation". On Wednesday Tortosa was forced to apologise for saying slain protester Carlo Giuliani "is disgusting to the worms underground". The father of Giuliani - who was shot in the head by a Carabiniere military policeman while attempting to throw a fire extinguisher at the cops - asked President Sergio Mattarella to get the State to apologise for Tortosa's denigration of his son's death. Tortosa said on Facebook that Giuliani was wrongly turned into "a hero" after death.
Tortosa later apologised for the worms comment.
"Of all the things I said on Facebook that's the one I most regret," he said on Sky TV.