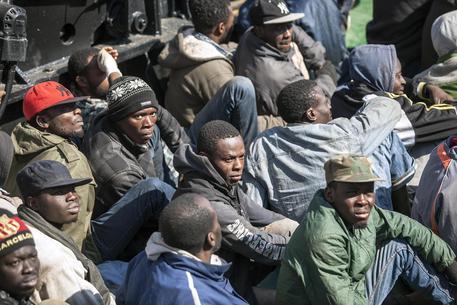 (ANSA) - Palermo, April 16 - Migrants reported that 12 people were killed in a fight that broke out between Christians and Muslims on a boat fleeing from Libya as the European Commission admitted Thursday that the migrant situation is deteriorating. Police in Sicily subsequently arrested 15 people on suspicion of multiple murder based on information collected from other migrants.
In a separate situation, police said they arrested alleged human traffickers suspected of throwing migrants overboard in the Strait of Sicily as they fled North Africa for Europe.
It was not immediately clear if the victims were dead or alive, but earlier reports said one dead man was thrown to sharks to keep them away from a migrant boat.
Meanwhile, 41 bodies and just four survivors were found by Navy searchers who arrived Thursday morning in the port of Trapani.
The survivors said their group of 45 people had left Tripoli in North Libya on a raft.
War-torn Libya is a frequent embarcation point for migrants fleeing violence in parts of Africa as well as the Middle East.
Almost all are headed for different parts of Europe but Italy is the closest landing point. In recent days, some 10,000 migrants have been rescued from the sea, mostly between Libya and Italy. The EC admitted Thursday that the crisis is deteriorating quickly. "The situation in the Mediterranean is serious and it will get worse in the coming weeks and months," said European Commission spokesperson Natasha Bertaud. Italy, which has seen a sharp increase this year in the already large flow of migrants heading to its coast, has repeatedly complained it is not getting enough help from Europe.
Authorities here are braced for arrivals to accelerate further as weather and sea conditions have been improving with the arrival of spring.
"We have to be frank," added Bertaud. "The commission cannot do everything on its own. We don't have the magic wand because we don't have the funds or political support (to do more)".