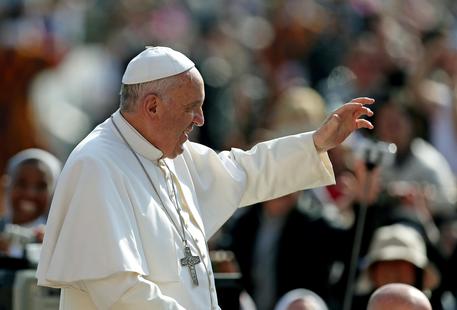 (ANSA) - Vatican City, April 15 - Gender theory aims to make everyone the same by eliminating differences, and this is actually "the problem, not the solution," Pope Francis said Wednesday.
Gender theory, according to Francis, aims to try to eliminate sexual differences but that instead may give rise to frustration and resignation, Francis said in his general audience in St. Peter's Square.
Therefore, "removing the difference (between women and men) is the problem, not the solution," the pope added in his comments before some 25,000 people in the square.
Both men and women alike were created "in the image and likeness of God," Francis said, urging more "creativity and boldness" in recognizing "female genius".
"God created man in His own image...male and female, He created them," so that both man and woman bear the image and likeness of God - both as individuals and also together, Francis said in his weekly general audience in St. Peter's Square.
The differences between the sexes "is not for opposition or subordination, but for communion," he added.
The pope also said that the world must apply more "creativity and boldness" in recognizing "feminine genius".
In this way woman are not only listened to, actually heard with their voices given weight and authority recognized by society.
Man and woman are "made to listen to each other", in order to work together. The pope said that the voice of women must not only be heard in the Church and society, but listened to closely and given weight and authority.
"It is necessary, in fact, that the woman is not only the most listened to, but that her voice has a real weight, an authority recognized in society and in the Church," said the pope.
"We have not yet understood in depth what are the things that the genius of women can give us, things that women can do in society," he added.
"This is the path to follow, with creativity and boldness," the pope said.
In the Bible, said Francis, Jesus "shines a powerful light on a long road still to be tread, a road upon which we have only taken a few steps".
http://popefrancisnewsapp.com/