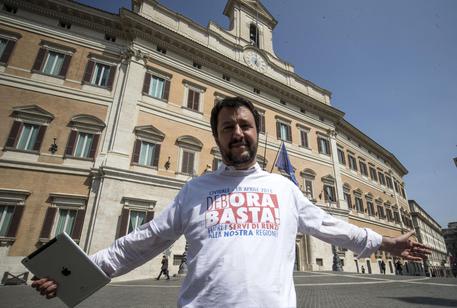 (ANSA) - Rome, April 15 - The upsurge in migrants trying to reach Italy is "just the latest proof that we don't need this Europe and the sooner we knock it down the better," Northern League leader Matteo Salvini said Wednesday.
"Europe remembers Italy when it wants to fine or tax us," he told the lower house of parliament, "but when we need a hand to block an invasion, because it is an invasion, Europe couldn't give a toss. We don't need this Europe".
The anti-immigrant party leader added that "the Renzi government and (interior minister Angelino) Alfano are complicit, co-responsible, this is a government that helps the smugglers, that finances the terrorists and that has thousands of deaths on its conscience." "All we have to do is stop the departures, the landings," he said, "the League is ready for everything to prevent Italians maintaining thousands of other immigrants".
"Let's go to north Africa to identify the real refugees who have the right of reception," he continued.
Alfano is "the most incapable interior minister in history," Salvini said in an interview, "there are 16th century hotels, farms with swimming pools and we will try to ensure that not even one of these places be put at the disposal of illegals so that we put first Italians, who deserve more than the robust, vaccinated adult migrant with an i-phone who swans around our cities laughing in the face of those who get up to go and work in the morning".