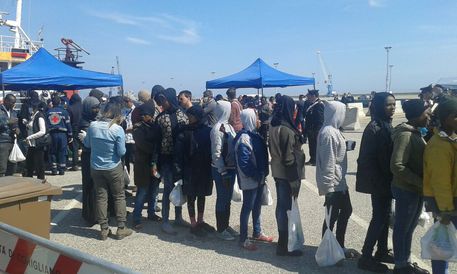 (ANSA) - Rome, April - Almost 10,000 migrants have been rescued in recent days, Coast Guard officials said Wednesday as new waves of people continued to arrive on Italian shores triggering concerns that this spring could set new deadly records for both migrant crossings and deaths.
Some 1,511 people were rescued on Tuesday alone in 12 different operations coordinated by the national Coast Guard relief service.
That came after the 8,480 people reported rescued in the Mediterranean between Friday and Monday.
Among Tuesday's operations, 503 migrants were plucked from five rafts while a patrol boat rescued another 131 people.
Merchant ships have been making a "significant" contribution to rescue efforts with one vessel, the Norman Corona, rescuing 95 migrants and transferring them to a patrol boat, the Coast Guard.
The rescues continued amid growing fears that about 400 migrants may have drowned in the sea off Libya after the NGO Save the Children said witnesses had reported a boat capsizing off the Libyan coast.
About 144 people were rescued by the Italian Coast Guard from that boat on Monday and nine bodies were recovered.
Rescuers were also put in danger as shots were fired, possibly at private tugboats assisting with the rescue of migrants.
State police were investigating reports that a Libyan patrol boat fired shots. Among Wednesday's arrivals were 236 migrants including eight children and many pregnant women brought to Messina in Sicily.
Another 415 migrants were brought by rescue ships to the commercial port of Augusta along with two alleged human smugglers who were placed under arrest.
And the commercial vessel King Jacob brought another 480 migrants from rescues on Tuesday into port near Palermo. On Tuesday, a further 1,169 refugees arrived in the capital city of Sicily.
UN officials say more than 500 migrants have died so far this year - 30 times more than in the same period last year, BBC reported on its website.