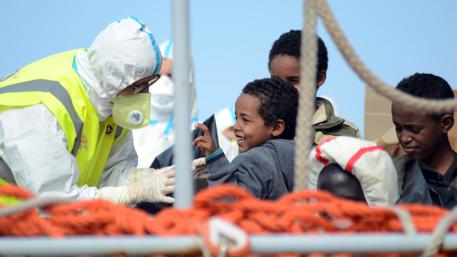 (ANSA) - Rome, April 14 - As many as 8,480 migrants were rescued in the four days between Friday and Monday in waters off Italy, the Italian Coast Guard said on Tuesday.
In the Strait of Sicily, 5,629 people were plucked from small boats, rafts and dinghies over the weekend, officials said. On Sunday alone the coast guard rescued 22 migrant boats. Another 2,851 individuals were rescued on Monday, they added.
In one dinghy, a dead body was recovered.
Coast Guard officials said that many of the migrants were Syrians while numerous others were fleeing sub-Saharan Africa aboard about 16 boats and four rafts.
Many were found after distress calls were made via satellite phones, a frequent procedure with human traffickers who call for help before abandoning migrants who had paid thousands of euros each for passage to Europe.
Four Coast Guard patrol boats as well as three boats from the finance police assisted the European Union's Frontex border patrol craft.
Several commercial tugboats as well as an Icelandic patrol board were also pressed into rescue service on Monday, with aircraft and helicopters operated by the Coast Guard brought in to help.
Italy has seen a sharp increase this year in the already enormous flow of migrants arriving on its coast from North Africa. Authorities have said that they are braced for even more arrivals due to the improved weather and sea conditions that have come with spring.