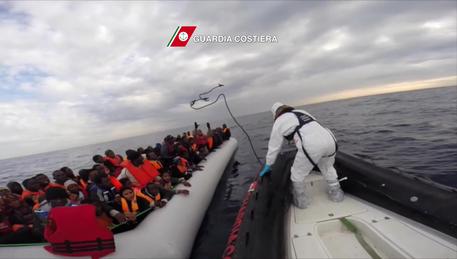 (ANSA) - Rome, April 14 - An alleged human trafficker threw the body of a dead migrant overboard to sharks following their dinghy during a sea crossing from North Africa, police in the Sicilian city of Ragusa said Tuesday.
The accused, who is from Guinea, arrived with a group of migrants on Monday, said officials who reported almost 8,500 people were rescued in waters off Italy over the previous four days.
A further 1,169 arrived on Tuesday and with Italian reception centres packed, more migrants may be sent by train to northern Europe, officials said.
As many as 11 bodies were recovered from among the migrants rescued in recent days, an EU migration official said.
The mass arrivals have heightened concerns that even larger numbers than in previous years will be making the extremely dangerous passage from Africa and the Middle East to Europe.
Too many fall into the hands of human traffickers who take the migrants' money and abandon them on the seas.
Police said the migrant thrown to the sharks likely died after he inhaled fumes from petrol that spilled over him in the open boat on rough seas.
Witnesses on the vessel said they were terrified by the sharks following the small boat, which disappeared after they were thrown the body.
Europe must brace "to cope with a heavy migratory season" with thousands of migrants poised to take to the Mediterranean this summer, the European Commission warned from Brussels.
The EC is ready to "play its part" and its new "holistic approach" will be unveiled next month, European Immigration Commissioner Dimitris Avramopoulos said.
Estimates of the desperate migrants who will try the dangerous crossing this summer range from 250,000 to 500,000. Authorities have said that they are braced for even more arrivals due to the improved weather and sea conditions that have come with spring.
As many as 8,480 migrants were rescued in only four days between Friday and Monday in waters off Italy, the Italian Coast Guard said on Tuesday.
In the Strait of Sicily, 5,629 people were plucked from small boats, rafts and dinghies over the weekend, officials said. On Sunday alone the Coast Guard rescued 22 migrant boats. Another 2,851 individuals were rescued on Monday, they added.
In one dinghy, a dead body was recovered.
Coast Guard officials said that many of the migrants were Syrians while numerous others were fleeing sub-Saharan Africa aboard about 16 boats and four rafts.
Many were found after distress calls were made via satellite phones, a frequent procedure with human traffickers who call for help before abandoning migrants who had paid thousands of euros each for passage to Europe.
Four Coast Guard patrol boats as well as three boats from the finance police and Navy vessels assisted the European Union's Frontex border patrol craft.
Several commercial tugboats as well as an Icelandic patrol board were also involved in Monday's rescue, with aircraft and helicopters operated by the Coast Guard brought in to help.
Italy has seen a sharp increase this year in the already enormous flow of migrants arriving on its coast from North Africa. It has been on the front lines, rescuing migrants who are headed for other parts of Europe but arrive first in Italy because the country's southernmost points are close to the North African coast of Libya.
That has triggered some security concerns, but Foreign Minister Paolo Gentiloni said Tuesday that there has been no intelligence information to date suggesting that potential terrorists could be among the boatloads of migrants.
"No one can rule it out in theory, but for now we do not have intelligence information" to this effect, Gentiloni told Radio 24.