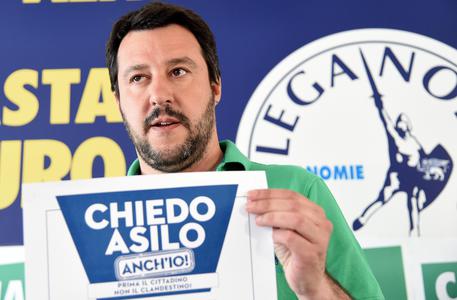 (ANSA) - Rome, April 9 - Northern League leader Matteo Salvini said Thursday that he has been suspended from Facebook for using derogatory language about Roma people a day after creating a big furore by saying Roma camps should be razed to the ground. "Facebook has suspended me for 24 hours because I used the word zingari (gypsies), a word my grandma used," he told the League's Radio Padania. He added that the controversy caused by his call to level Roma showed Italy was "hypocritical".
Those comments caused widespread condemnation, including from the Vatican. Cardinal Antonio Maria Veglio, the head of the Vatican's department for migrants, described them as "absurd" and "stupid".
These are extreme positions, absurd, like those who say 'Muslims? Kill them all.' Or, 'Migrants? They should all go home'," the cardinal told ANSA.
But Salvini remained unrepentant on Thursday.
"It saddens me to hear such words come out of the mouth of a bishop," said Salvini.
"If I had sinned, the bishop's job would have been to put me on the right path, not to insult me.
"But I speak to the parish priests in the provinces, not the bishops who love in 300-square-meter apartments, perhaps even with servants".