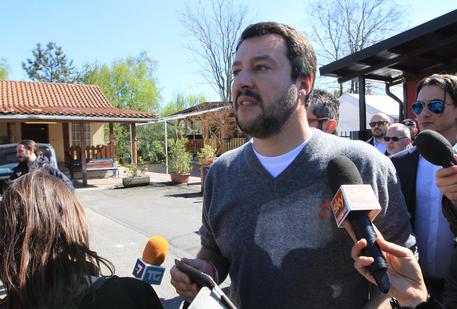 (ANSA) - Milan, April 8 - Anti-immigrant Northern League leader Matteo Salvini called Wednesday for a "revolt of the respectable," urging Italians to renounce their nationality and apply for political asylum "so that they can enjoy the same rights as illegal immigrants".
Salvini made the controversial call in a broadcast on Radio Padania, saying the League would stage nationwide "I ask for asylum" rallies Saturday and Sunday in "more than 1000 Italian piazzas".
Italians should download a form from the League website enabling them to apply for asylum and renounce citizenship "seeing how the Renzi government discriminates against us," he claimed. "You can't give 1000 euros a head to people who land here and only give 280 to Italians who are real invalids," Salvini said.
In a separate interview on La7 television, Salvini also lashed out at Italy's Roma population saying "the Roma ought to have the same rights and duties as other Italian citizens".
"Roma camps don't exist in almost any part of Europe," he claimed, repeating his proposal "to raze the Roma camps to the ground".
"If somebody decides to choose a nomadic life then they shift themselves, but there are camps that have been there for 20, 30 years".
"In some camps I have seen two storey villas, just because they are semi-mobile they don't pay IMU (property) tax. Do you want to stay in Italy? Well then, dear Roma, you have the same rights and duties as Italians".
Salvini said he also was irritated by premier Matteo Renzi claiming that taxes have not increased.
"It would be enough for me if viewers were allowed to do a live phone-in and say 'it is true I have paid fewer taxes,'" yet instead in Lombardy "thanks to the cuts by Renzi we haven't been able to abolish pharmacy prescription charges".
If he took office in government, Salvini said he would immediately apply across the board a 15% single band of income tax.
"We have to lower taxes to recover fiscal evasion, if you increase fiscal pressure citizens either don't pay or they escape to other countries with their investments".
An across the board single tax band "works in 40 countries," he claimed, adding that among the solutions to Italy's woes is taxing prostitution.
On foreign policy Salvini said Italy should put its own house in order to guard against the risk of Islamic terrorism before getting involved in new overseas commitments.