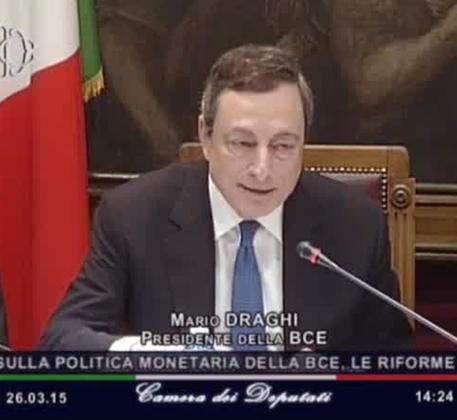 (ANSA) - Rome, March 26 - The European Central Bank's quantitative easing program should add one percentage point to Italy's GDP in 2016, ECB President Mario Draghi told the Lower House Thursday.
QE should keep borrowing costs low, hold down the exchange rate, and that will push up economic growth, Draghi said. Italy's GDP is forecast to rise 1.3% in 2016.
Draghi said that there is no shortage of bonds available for purchase through the quantitative easing program.
The ECB is aiming to buy 60 billion euros of bonds monthly for 18 months to stimulate demand and inflation but some critics have said they are concerned there won't be enough available paper. His appearance marked the first time in six years that Draghi addressed the Italian Lower House, according to Bloomberg news.
He last spoke to Parliament in 2009 when Draghi was still head of the Italian central bank, Bank of Italy.
Financial market confidence in Italy's fiscal competence and its economic prospects has improved significantly, shown by the narrowing interest-rate spread with Germany, he added.
Draghi recalled the very difficult period in 2011 when the spread between Italy's benchmark 10-year bond and its German counterpart widened to about 500 basis points.
In comparison, the spread at midday Thursday stood at about 114 basis points, suggesting that investors no longer demand very high interest rates in exchange for investing in Italy. He noted that structural reforms are important to encourage ongoing growth, as does efforts to help commercial banks reduce the burden of bad loans.
The ECB "looks very favorably on initiatives to reduce the weight of impaired (loans) on banks' balance sheets in order to free up resources," to help businesses, said Draghi.
He said that ECB stress tests on major banks last year has helped strengthen financial institutions.
He added that he sees "more favourable growth prospects" for the eurozone.
Meanwhile, that over-regulation of business in Italy forces firms to remain small.
That lowers productivity for the economy as a whole, and reducing regulations could increase business size between 8% and 12%, he said.
Meawhile, Draghi added that too often, fiscal regulations in the eurozone have been ignored.
It might be more useful to replace rules with stronger institutions, he suggested.
"Fiscal rules in the eurozone were disregarded repeatedly, lending mutual trust a lot of tension," he said.
He added that the ECB "is in favor of a bad bank in Italy" that would take on toxic loans, thus freeing up the country's banks to extend credit. "Of course the ECB looks with favor on a bad bank in Italy," Draghi said.
At the same time, the country has too many banks and "there are strong arguments in favor" of consolidating Italy's banking system, he said.
Until not too long ago Italy had "750 banks, which means 750 boards of directors, each with a minimum of five members," Draghi said.
"The clients pay for this whole system".