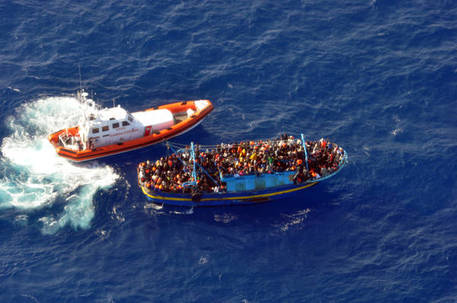 (ANSA) - Palermo, March 25 - Anti-mafia investigators in Palermo said Wednesday that armed groups in Libya have been behind some of the human trafficking that has seen dangerous and sometimes deadly migrant crossings in small boats to Italy from North Africa.
The purpose of the trafficking was to raise funds for the Libyan groups, investigators said.
Earlier this month, the UNHCR said that already this year some 470 migrants have died in the Mediterranean compared to just 15 in the same period in 2014 as more people attempt the risky voyage.
Some observers say that the trips have been made much more dangerous by organized human traffickers who crowd large numbers of migrants onto tiny boats and rafts, confident that European rescuers will find them.
It is believed the traffickers even contact EU agencies to alert them to migrants they have abandoned in the sea.
Italy's Mare Nostrum rescue program was born of two migrant disasters in 2013 but was replaced in November 2014 by the EU's Triton programme.
However, that is widely seen as not up to the task of saving all migrants.