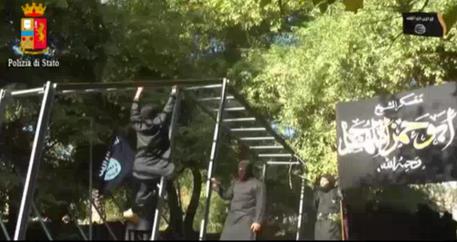 (see related) (ANSA) - Rome, March 25 - A 20-year-old Italian with Moroccan roots who is suspected of being the author of a 64-page Italian-language document of ISIS propaganda that recently appeared on the Internet is among the people arrested on Wednesday in an operation to bust a jihadist recruitment cell, ANSA sources said. The document, which was detected by the authorities on February 28, presented propaganda detailing ISIS's version of what it is doing in Syria and Iraq and how it supposedly protects supporters and is ruthless with enemies. The young man allegedly prepared the propaganda in November.
Its significance is not so much the content, but the fact that it targeted an Italian audience, according to investigators. It was published by a number of users on Facebook and other websites, the sources said.
The two other people arrested are both Albanian nationals, the sources said - an uncle and nephew, one of whom lives in Albania, while the other is a resident of the province of Turin.
The three people arrested were allegedly in contact via telephone and Facebook with Anas El Abboubi, one of dozens of ISIS foreign fighters linked to Italy.
El Abboubi is currently thought to be in Syria. He was arrested in June 2013, but subsequently released by a court.
Before going to Syria he visited Albania.20