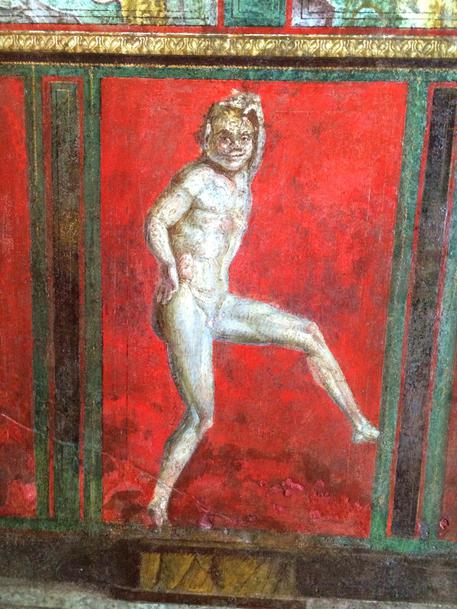 (refiles, changes Thursday to Friday).
(ANSA) - Pompeii, March 20 - Pompeii's largest house Villa dei Misteri (Villa of the Mysteries), famous for its frescoes of the cult of Bacchus or Dionysus, reopened Friday after a two-year restoration and a three-month closure for work on its paving. "Here in Pompeii we're turning over a new leaf" after years of collapses and damage to the UNESCO site, said Culture Minister Dario Franceschini as he cut the ribbon. "Today is a truly important day for Pompeii," he went on. "We have behind us a year of extraordinary work. We have closed three work sites while another 13 have been opened, nine contracts have been started and we have hired 85 people in various positions. "The visitors rose by 200,000 in 2014. "We have very many initiatives planned for the (Milan) Expo (world's fair too. "We know the world looks to Pompeii with scrupulous attention. "Today Italy is proud to tell the world: 'We have turned over a new leaf in Pompeii'".
The restoration, which began in May 2013, was funded by the Special Superintendency for the Archaeological Heritage of Naples and Pompeii (SANP) and was conducted in lots so that parts of the Villa were still open to the public throughout the restoration process.
The Villa was first discovered in excavations in 1909 and was exceptionally well-preserved despite the eruption of Vesuvius in 79 A.D., which covered it in a layer of over 30 feet of volcanic ash.
The recent restoration work, which involved 70 rooms of the Villa, corrected some of the damage inflicted by previous restoration techniques that were found to be harmful to the Villa's frescoes over the years.
In work done during the 1930s, wax was applied to preserve the frescoes, but ultimately faded the colors, something that was corrected using techniques to first identify the nature of the chromatic alterations and other damage over time and then perform restorations.
In addition to work done to restore the Villa's frescoes, the most famous of which is the Dionysiac friezes portraying the mysteries of the Cult of Dionysus from which the Villa takes its name, work was also done to clean the intricate mosaic floor decorations.