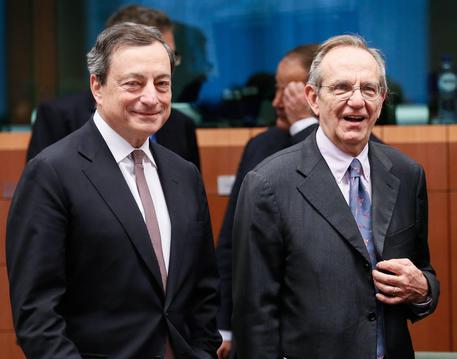 (ANSA) - Rome, March 19 - Economy Minister Pier Carlo Padoan on Thursday denied Italy is breaking European Union budget rules, just hours before Premier Matteo Renzi was due to attend an EU summit in Brussels.
Padoan's remarks came after a European Central Bank (ECB) report said Rome was some distance away from meeting its commitments under the Stability and Growth Pact. Padoan said that European rules on budget discipline among member States had several goals and included a certain flexibility for members in times of difficulty.
"You respect the debt rule in part by conducting decisive reforms, as the European Commission has said," Padoan commented.
Padoan added if the rules are inadequate to deal with exceptional circumstances, such as a prolonged recession, a "contradiction" can develop.
That happened with Italy during the development of the 2015 budget, when Renzi and Padoan argued strenuously for greater flexibility in the application of rules, which the EC came to accept.
The ECB said Thursday that Italy was a long way from meeting its commitments to the EU in terms of cutting its massive public debt of over two trillion euros.
The Frankfurt-based central bank added in its regular economic bulletin that Belgium was also behind. "In both Italy and Belgium, there continues to be significant deviation from the structural effort that is required under the debt rule (of the Stability and Growth Pact)," read the ECB report. The bank also suggested the European Commission was wrong not to open excessive deficit procedures against Italy and Belgium over their 2015 budgets.
Still, the ECB report praised the structural reform efforts and said that if Italy continued in this regard, its reforms could in the long run add 10% to gross domestic product (GDP).
The European Commission for its part said it would continue its regular monitoring of Italy and Belgium's fiscal movements and its adherence with respect to debt rules.
Valdis Dombrovskis, the Commission's vice-president, said the EC is "aware" of the ECB's concerns.
But no excess-deficit procedure had been opened against Italy because the EC was aware of progress being made by Renzi's government on implementing structural reforms.
Meanwhile, Padoan said that he was concerned the European Union's strength was flagging and said that the European Parliament must taken on a greater role in encouraging economic growth.
"The EU Parliament must have a stronger voice, and there should be put into place a more effective relationship" between Parliament, the European Council and the Commission, said Padoan.
This is especially important at a time when the European Union is working to identify and put into motion an economic strategy for the long term, he added.