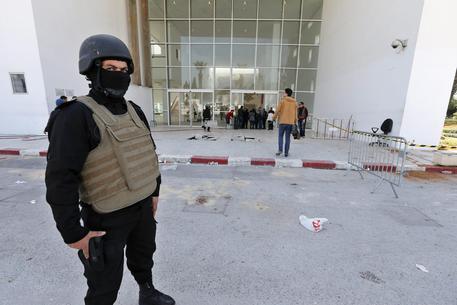 (ANSA) - Rome, March - The target of Wednesday's terrorist attack in Tunis was always the popular national museum, and not the nearby parliament, according to a message reportedly from Islamic State (ISIS) terrorists, TV France 24 said Thursday.
The message added that two terrorists killed in the attack were Tunisian.
There had been speculation that parliament was also a target and it was evacuated during the midday attack on the museum, a popular tourist attraction.
ISIS has claimed responsibility for the attack that killed 23 people including two terrorists, intelligence expert Rita Katz said on the website of her organisation SITE.
Katz stressed it was not yet possible to verify the claim. ISIS named two of its militants who allegedly took part in the attack, Abu Zakarya al-Tunisi and Abu Anas al-Tunisi.
SITE said that ISIS is warning that Tunis was "only the first drop of rain" and its messages show it is planning new attacks.
Katz, whose organization Search for International Terrorist Entities (SITE) follows ISIS messages, posted the comment on Twitter.