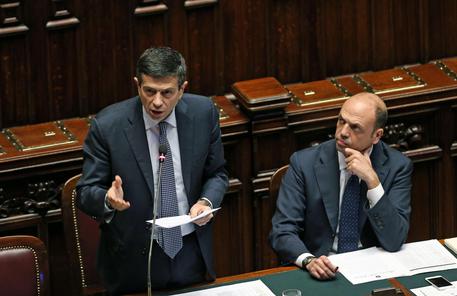 (ANSA) - Rome, March 18 - Transport and Infrastructure Minister Maurizio Lupi reported to parliament Wednesday after being linked to a corruption scandal and denied suggestions he used his influence to obtain work for his son. There have been calls for Lupi to quit from several quarters and opposition parties have presented a no-confidence motion after his son Luca was linked to a corruption probe. "I want to go to parliament to report on the decisions (made)," Lupi said during a visit to the Milan trade-fair centre to see the Made Expo show. "I have never exerted pressure to ask for my son to be hired, so this will never appear in any wiretap," added the minister, who received flak in Milan, with some exhibitors shouting "shame" and "resign". Interior Minister Angelino Alfano, the head of Lupi's New Centre Right (NCD) party, backed the minister, who has come under fire in connection with a massive graft probe uncovered Monday related to the infrastructure ministry and its previous incarnation as the public works ministry. Judges investigating corruption in public contracts have suggested a relationship between Lupi and some of the suspects in the probe.
Ercole Incalza, a public-works official for seven governments, was arrested Monday along with businessmen Stefano Perotti and Francesco Cavallo, as well as Incalza's aide Sandro Pacella, in the probe that saw more than 50 people including politicians placed under investigation for suspected kickbacks that inflated costs by as much as 40%. Lupi's son was allegedly hired by an engineer, Giorgio Mor, at Perotti's behest in what a judge said was a favour that might have been reciprocated in some way. The indirect hiring of Luca Lupi by Perotti may have been part of "an illicit quid pro quo" by the minister, a judge alleged.
Prosecutors said Wednesday Incalza oversaw "systemic corruption" on a massive scale.
"This is not a story of ordinary corruption but a scenario of devastating, systemic corruption in the management of major public works contracts," prosecution papers said. They described "a criminal organization of exceptional breadth that has affected the flow of State financing for at least two decades". Prosecutors said Incalza held on to positions of power for over 30 years, de facto ruling the ministry currently headed by Minister Maurizio Lupi. "In spite of the fact that he retired at least a decade ago, (Incalza) remains to this day at the head of a ministry with the same decision-making powers (as a minister), albeit under the guise of a singular job description as consultant to the minister," Florence prosecutors wrote in their pretrial custody request.
They added most of the actual building of public works is usually carried out by "myriad subcontractors that are often contiguous with mafia criminal elements". For example, a contract to dispose of construction debris from the new Florence TAV high-speed rail line went to companies headed by a firm "that is close to the Casalesi" Camorra mafia clan, according to prosecution papers.