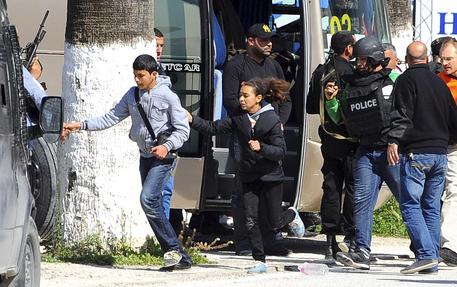 (ANSA) - Rome, March 18 - Local media in Tunis said Wednesday that up to 22 people were likely killed in Wednesday's terror attack there, even as Tunisian Premier Habib Essid said 19 people were dead.
The fatalities were initially thought to include 17 hostages - likely tourists on day trips from cruise ships - and two terrorists.
The casualties also included two Italians, according to reports from Al-Jazeera.
Premier Matteo Renzi the terror attack has struck a blow to moderation in political and social life, and hurts everyone. "Wherever there is an attempt to kill moderation, a blow is struck against every one of us and against patriotic and cultural commonality," Renzi said.
Tunisia, the birthplace of the Arab Spring, "has acquired an innovative institutional framework as corroborated by recent elections", he said.
The attack took place "in a symbolic place, a place of culture that was next to parliament," Renzi said.