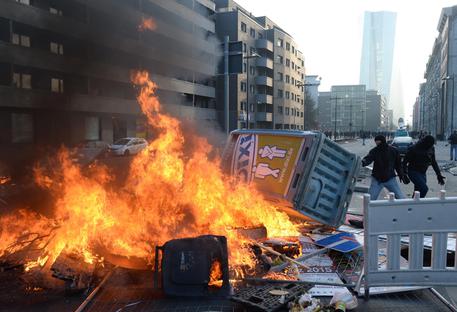 (ANSA) - Rome, March 18 - Clashes broke out on Wednesday in the centre of Frankfurt, where thousands of anti-austerity demonstrators rallied ahead of the opening of the new headquarters of the European Central Bank (ECB). Eight police officers are reported hurt and 350 people were arrested after members of the group, that goes by the name 'Blockupy', started throwing stones and set seven police cars on fire.
The police had erected barbed wire and barricades to keep the protesters at least 10 meters away from the premises but the measures were not sufficient to controll the group and water canons were used after the scuffles erupted.
Protesters said police threw tear gas at them but police spokeswoman Claudia Rogalski responded that officers are equipped with pepper spray and that was the substance they most likely used in their defence. "There are peaceful demonstrators and also criminals," said Rogalski adding that over one thousand officers had been