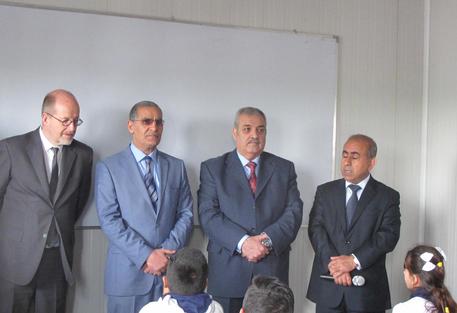 (ANSA) - Erbil, March 18 - As Kurdish Peshmerga continue to push forward against Islamic State (ISIS) forces amid speculation surrounding a future offensive to retake Mosul, many of the internally displaced from the city are staying in tents in the Baharka camp, where a secondary school was inaugurated on Tuesday.
The camp, near the regional capital Erbil, was set up after the June 2014 taking of Mosul by the transnational jihadist group. The building of the school was made possible by a 200-million-dollar contribution to the UN for humanitarian assistance announced shortly thereafter by Saudi Arabia.
The director of the United Nations Educational, Scientific and Cultural Organization (UNESCO) office for Iraq, Axel Plathe, flew in from Baghdad to speak at the event and discussed the agency's work with ANSA.
As it is tasked with ensuring the conservation of world heritage, the UNESCO has come in for criticism after the recent destruction of the Mosul Museum, the World Heritage sites Hatra and Nimrud and countless other artifacts and archaeological sites in territory under ISIS control.
Plathe, however, is quick to point out that the agency has neither an army nor a mandate "to place guards outside museums" or anything similar.
What it can do, he told ANSA, is what it is currently doing with the Iraqi National Museum in Baghdad, which recently reopened after a 12-year closure.
UNESCO is "training staff on emergency preparedness and helping the national museum complete inventories", he said, which are "essential for preventing illicit trafficking and tracking it".
He noted, however, that most of what had once been in the Mosul museum had already been moved in Baghdad after 2003, but that there were an estimated "170-180 items still present" at the time of the attack. The Iraqi tourism and antiquities ministry has not yet released an official assessment, he said.
It is still unclear what the extent of the damage to the Hatra site was, he said, "which initial reports indicate was entirely bulldozed", but which "satellite images indicate that this may not be the case".
Plathe noted that "we are very much dependent on media reports, and - as you know - the media reports are very inaccurate and may be based on propaganda".
UNESCO's mandate includes promotion of freedom of expression and the protection of journalists, and Iraq continues to suffer one of the highest death tolls for journalists, many of them killed in targeted assassinations.
Plathe said that Iraq is one of the five roll-out countries for the UN Action Plan on the Safety of Journalists and the Issue of Impunity. He noted that one of the problems was security, but that others included the self-censorship linked to it and the issue of "unclear ownership of the media and non-existent independent media outlets", which are "essential for democratic structures, accountability and a human rights approach in government affairs".
"Many of the media outlets are linked to political parties, which makes independent reporting difficult", and thus journalists cannot "complete their professional duties".
UNESCO would like to address the lack of security for journalists in Iraq through training, he said.
"We are hopefully soon - we are still negotiating the funding - implementing a training for security forces on how to deal with media", he said, "using a tested approach that was successfully implementing in Tunisia".
"We bring together journalists and security forces in a training environment where we train the security forces how to deal with journalists." He noted, moreover", that sometimes journalists "put themselves at risk through non-professional and partisan reporting", often linked to issue of unclear ownership of media.
He told ANSA that UNESCO had "recently signed an agreement with the Iraqi journalists syndicate to train journalists on non-partisan reporting, to give them some tools to protect themselves through avoiding non-professional approaches".
Plathe stressed that, in any case, "the situation for journalists in Iraq is very bad", making it extremely difficult to get accurate information.