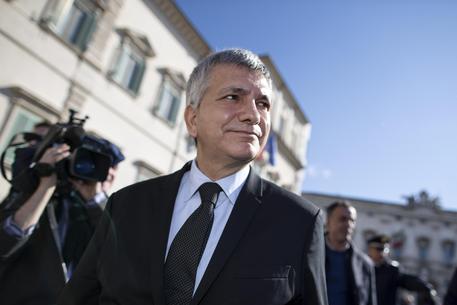 (ANSA) - Bari, March 17 - Openly gay Puglia Governor Nichi Vendola said Tuesday he wants to marry his partner of ten years, Ed Testa.
"Everything will change (after regional elections) in May," said Vendola, the founder and leader of the small leftwing Left Ecology Freedom (SEL) party.
"I'd like to marry Ed, but only if he asks me," the governor told Chi tabloid magazine in an interview that hits the stands Wednesday.
"I will also think about whether or not to become a father," said the governor and LGBT activist.
"I have always loved the world of childhood and would like to write a book of nursery rhymes".
Asked what he thought of Dolce & Gabbana and their defense of the traditional heterosexual family, Vendola answered "I believe that from the height of their social rank, they truly do not understand what it means to live in a country in which homophobia kills and the civil rights deficit weighs on many lives".
A firestorm erupted at the weekend when Elton John and other celebrities called for a boycott of the fashion house after Domenico Dolce made what appeared to be disparaging comments about in vitro fertilization and surrogate motherhood, techniques often used by gays who want children. Vendola - who last November called for a new leftwing alliance called Human Factor to challenge what he said is the government's "drift to the right" - went on to say that he has always held the battle for civil rights to be a central tenet for him as a politician.
"I believe in equality...and I would like for this principle to be at the center of everything," he said.