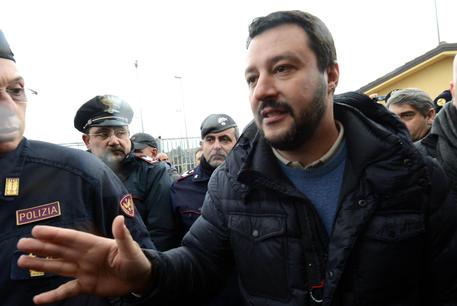 (ANSA) Mineo (Catania) March 16 - Northern League leader Matteo Salvini called on Premier Matteo Renzi and Interior Minister Angelino Alfano to resign Monday over a migrants' reception centre that "discriminates against Italians".
"Renzi and Alfano should resign," over the Cara reception centre for asylum seekers at Mineo in the Sicilian province of Catania, Salvini told reporters. The centre has been placed under investigation by prosecutors amid charges of widespread overspending.
"The Cara at Mineo was created to deal with an emergency situation but now we are in year four and this structure can only contain 4,000 people and discriminate Italians" Salvini claimed after visiting the centre.
"There are people getting pre-paid phone cards, playing football, listening to music or having school lessons".
"There are 160-square-metre homes where an average of 7-8 people live - they were homes for the American military - these are solutions that many Italians would like to have".
Salvini underlined that "the premier must reply personally about this shame".