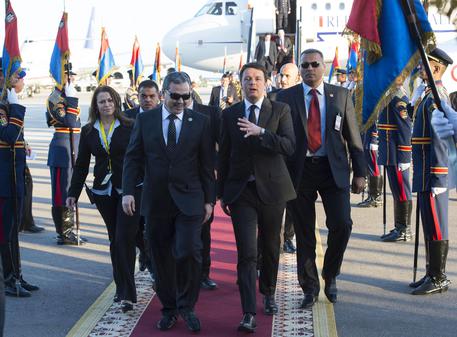 (ANSA) - Rome, March 13 - Premier Matteo Renzi said Friday that the international community must "intervene in Libya before ISIS militias" systematically seize not only small pieces of the war-torn nation but control a significant area.
Renzi again called for greater diplomatic efforts by the United Nations.
He spoke at an Egypt-hosted regional economic conference in Sharm el-Sheikh, which Renzi said must send the message to ISIS militants that "we are strong, stronger than them".
He added that the conference must show "we are more determined and committed to creating an area of prosperity and peace for all".
Despite ISIS terrorist claims, religion has nothing to do with terrorism, Renzi said at the economic forum hosted by Egyptian President Abdul Fattah al-Sisi at the Red Sea resort. "We have to unite our forces to face the challenge" of terrorism," he said.
"There is no clash of civilisations and the fight of the civilised world (is) against a few extremists that have nothing to do with religion".
ISIS has threatened to "march on Rome" and some have become concerned as the militant group seizes more territory in Libya - which lies only about 300 kilometres away from Italy's southernmost borders.
Egypt is "an extraordinary area of opportunity", the premier added.
"We have confidence in Egypt and its leadership, in its ambitious macro-economic reforms: we support its mission in favour of prosperity and stability," he said, praising the wisdom of the country's president, who was in the audience.
"The Egyptian challenge is our challenge too, the stability of Egypt is our stability.
"There is my personal commitment, and Italy's, to work with you also on the Syrian and Libyan crises," he told Sisi.