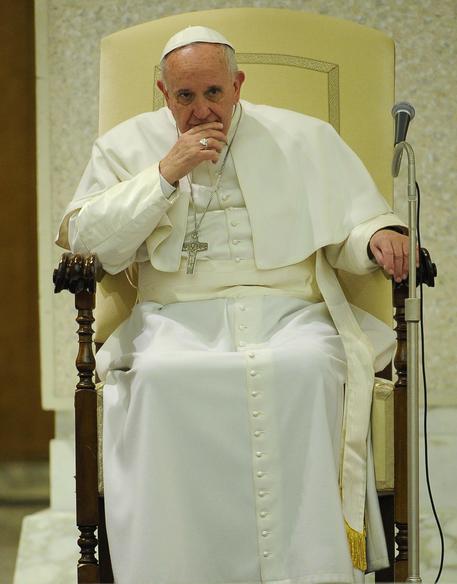 (ANSA) - Rome, March 13 - Pope Francis on Friday announced an extraordinary Holy Year devoted to mercy starting December 8 2015, 50 years from the end of the Second Vatican Council, with the opening of St Peter's Basilica Holy Door, and ending on November 20, 2016. The bull calling the year will be formally published on April 12, the Sunday of Divine Mercy.

Earlier, he told a Mexican TV channel Friday, the second anniversary of his election, that he "had the feeling" that his papacy "will be short".

However, he did not say he would consider resignation.
That was the choice of his predecessor Benedict XVI, who shocked the world by taking the very unusual step in early 2013 of resigning the papacy for health and age reasons.
"I have the feeling that my pontificate will be brief: four or five years; I do not know, even two or three," said Francis. "Two have already passed," he added.
"It is a somewhat vague sensation. Maybe it's like the psychology of the gambler who convinces himself he will lose so he won't be disappointed and if he wins, is happy," the pope continued.
"I do not know. But I feel that the Lord has placed me here for a short time, and nothing more...But it is a feeling. I always leave the possibility (to change) open".
Pope Francis is seen as a potential target for Islamic State (ISIS) jihadists.
Francis rarely talks about security although he has spoken publicly about his human frailties, such as the natural fear of physical pain and suffering.
He also spoke in the interview about wider concerns, including human trafficking, drug crimes, abuse by Catholic clergy, issues facing modern families from marriage to communion for divorced Catholic

On a lighter note,  the Argentine pontiff said losing the freedom to go out for a casual pizza and move about freely without security concerns are a few of the drawbacks to being leader of the world's Catholic Church.

"The only thing I would like is to go out one day, without being recognized, and go to a pizzeria for a pizza," the pope said. When asked if liked being pope, Francis replied: "I do not mind".