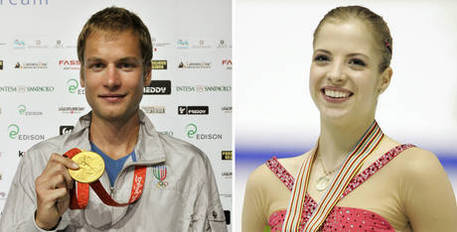 (ANSA) - Lausanne, March 10 - The World Anti-Doping Agency (WADA) on Tuesday asked the Court of Arbitration for Sport (CAS) to lengthen a 16-month Italian ban for skater Carolina Kostner to 2-4 years for helping her ex-boyfriend Alex Schwazer dodge a drugs test.
Italian Olympic Committee (CONI) prosecutors had initially requested a four-year ban for former world champion Kostner for her role in the violations by Schwazer, the 2008 50km walk Olympic champion.
However, Italy's anti-doping tribunal opted for the 16-month ban, explaining that Kostner did not know Schwazer was using drugs, adding that even though she "knowingly lied" to a WADA inspector, it considered "the attenuating circumstance" that she was in love.
Kostner, who won gold at the 2012 figure-skating world championship and bronze at the 2014 Winter Olympics in Sochi, was also charged with failing to report doping offences to the authorities.
Schwazer has been banned from competition until January 2016 after testing positive for the illegal blood-booster EPO just before the London Olympics.
CONI prosecutors opened a case against Kostner after media reports that she confessed to criminal prosecutors that she helped Schwazer dodge a surprise doping test in July 2012.
Kostner is also appealing the 16-month ban, according to a statement from the court of arbitration.
It said that she "principally (is) seeking its annulment and a declaration that she did not commit any breach of the anti-doping rules".