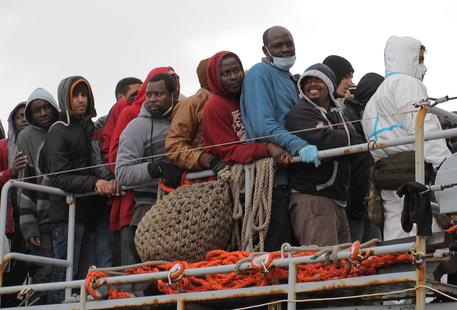 (ANSA) - Rome, March 6 - Between 500,000 and a million migrants could set off for Europe via Italy from Libya this year, the executive director of the EU's Frontex border agency told ANSA Friday. "We have to be ready to address a more difficult situation than last year," said Fabrice Leggeri. "Our sources tell us there are anywhere between 500,000 to a million people ready to leave from Libya". The EU has vowed to boost Frontex's Triton operation to try to cope with greater migrant flows and avert disasters. Frontex coordinates the EU's Triton maritime patrol operation in the southern Mediterranean, which replaced Italy's better-funded Mare Nostrum migrant-search-and-rescue programme last year.
Frontex "can't cope" on its own with a migrant emergency in the Mediterranean, Leggeri said. He asked for "more resources" from the EU as well as a "contribution" from more member states.
Leggeri admitted that migrant operations near the Libya coast were risky after cases of human traffickers threatening Italian coast guard vessels. "The Italian authorities have taken steps to reinforce security and mitigate the risk," Leggeri told ANSA. "I can't go into specifics because it is sensitive information. We had an exchange of opinions on this with the EU member nations. But that doesn't mean where won't be incidents tomorrow". Also on Friday, Foreign Minister Paolo Gentiloni said in the Latvian capital of Riga that there's no need for "scaremongering" on the migrant issue. "We Italians and Europeans need to commit more to facing the migration phenomenon," the minister said at an informal meeting of EU foreign ministers that takes place every six months.
"We call on Frontex to cooperate more". A reported 8,918 migrants have landed in Italy from January 1 through March 4 this year, a significant increase from the 5,611 recorded in the same period last year, Gentiloni said Thursday. The minister also noted that a total of 170,000 migrants disembarked on Italian coasts in 2014, out of a total of 278,000 in the European Union. Overall, 70,000 asylum requests were presented in Italy, the country with the highest number of applications after Germany and Sweden - up 140% on the previous year. Gentiloni went on to praise Triton for saving the lives of 23,000 immigrants from October until January. However, he added, "more can be done".
The deaths at sea of 50 refugees in the latest Mediterranean disaster on Wednesday has reignited debate about the effectiveness of the Triton program.