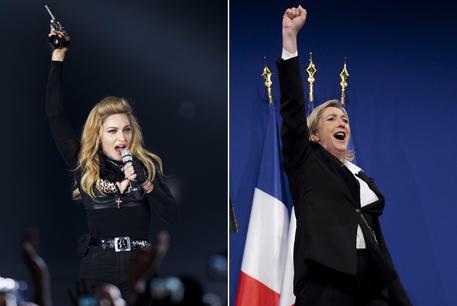 (ANSA) Paris, March 3 - French far-right presidential candidate Marine Le Pen said Tuesday she will accept "with pleasure" an invitation by former foe Madonna to bury the hatchet between the two women.
Recently Madonna denounced what she said was the climate of violence, intolerance and anti-semitism sweeping through France and Europe with the rise in support for parties like Le Pen`s National Front "making me think of Nazi Germany".
During a 2012 tour Madonna climaxed a concert by displaying a photo montage of Marine Le Pen with a Nazi swastika on her forehead.
However when asked about Le Pen this week Madonna said "I would like to have a drink with her, perhaps I misunderstood her".
"I don't want to fight a war, I want peace in the world, I would like to meet her and speak to her, to know what she really thinks about human rights issues not just in France but in the whole world," said Madonna.
Le Pen for her part said "I accept with pleasure Madonna's invitation, I appreciate people who act in good faith".