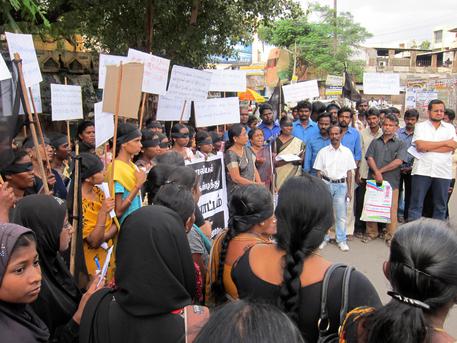 (ANSA) - New Delhi, March 3 - A BBC documentary containing shocking statements by one of six gang rapists who sexually tortured a 23-year-old medical student on a bus in 2012 has sparked an outcry in India, sources said Tuesday.
The victim "should not have opposed resistance," Mukesh Singh told BAFTA award-winning British filmmaker Leslee Udwin in a 16-hour interview on death row at New Delhi's Tihar prison.
"If she had stayed calm she would have saved her own life," the rapist said of the young woman, who died of her horrific injuries nine days after the brutal attack in which her male companion was beaten with an iron bar to within an inch of his life.
"Good girls should never be out at nine o'clock at night," the convict said.
"People have a right to teach such women a lesson...the woman is always more guilty than the man".
Singh went on to say the death penalty, which was introduced after that rape and murder case sparked a national and international outcry, will be a danger to women because "it will induce rapists to kill their victims to prevent them speaking out".
Singh drove the bus where the horrific attack took place over the course of several hours.
He was convicted and sentenced to death along with co-defendants Vinay Sharma, Pawan Gupta, and Akshay Thakur. A fifth defendant was found dead in prison before he could be tried. The transcript of the interview was made public by British tabloids on Monday.
Udwin's documentary is to be broadcast March 8, which is International Women's Day.