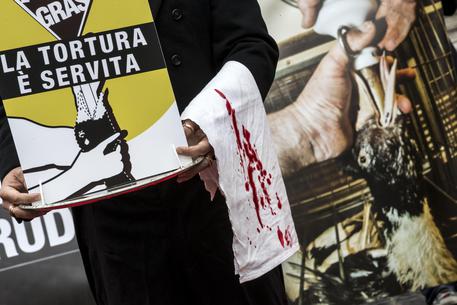 (ANSA) - Brussels, March 3 - A delegation of three MEPs on Tuesday handed the European food safety commissioner a petition with 320,000 signatures urging the EU to ban the production of foie gras.
Fatty liver paté is obtained by force-feeding geese and ducks by ramming pipes down their throats three times a day and pumping up to four pounds of grain and fat into their stomachs, according to petition co-sponsor People for the Ethical Treatment of Animals (PETA).
This causes their livers to grow to 10 times their normal size, a practice which the petition signatories say is cruel and causes disease in the animals.
The signatures were collected by four animal rights NGOs and delivered by German independent leftist Stefan Eck, Dutch animal rights party MEP Anja Hazekamp, and British Labour MEP David Martin. The petition calls for the practice to be banned in Belgium, Bulgaria, France, Hungary and Spain - the only five countries in which it is still legal.
"We submitted a wealth of scientific evidence and formal appeals against the violations committed in the production of foie gras," said Peter Stevenson from Compassion in World Farming NGO.
"The response has been pathetic," he added.