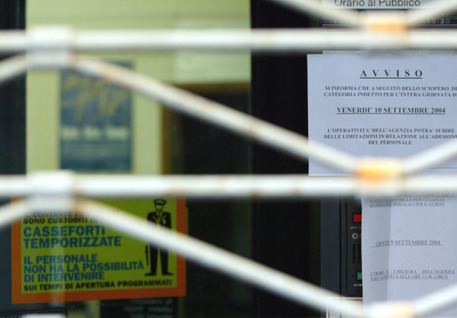 (ANSA) - Milan, March 2 - Up to 95% of credit union workers went on strike Monday to protest a contract decision taken by the Federcasse national association of credit unions, said Fabi, a bank worker's labor union.
The workers are part of the Italian credit cooperative BCC and took part in the strike called by five labor unions in the sector to protest Federcasse's unilateral decision to terminate the sector's collective bargaining contract.
The highest level of strike turnout, 95%, was in the Lombardy region, where the majority of BCC workers are located.
This was the first time in 15 years that BCC workers have taken to striking against the withdrawal of the two bargaining contract levels, national and regional, the first of which is already in effect and the second of which will go into effect April 1.
The cancellations were both unilaterally decided by Federcasse, resulting in a removal of rules and workers' rights that were previously shared between the national association and workers.
Fabi national secretary Luca Bertinotti asked Federcasse to return to the bargaining table following the high turnout for Monday's strike.
"We ask Federcasse to abandon positions of sterile intransigence and to reopen the dialogue and a serious and respectful meeting with the labor unions, taking a step back on the cancellation of the collective bargaining contract, which takes workers' rights away and puts the sector back fifty years," Bertinotti said.