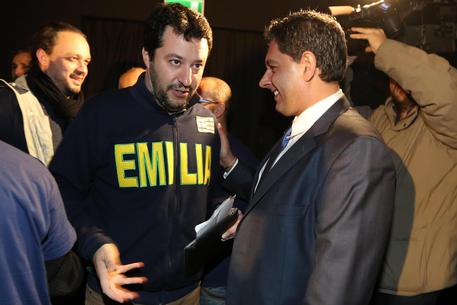 (ANSA) Rome, March 2 - Leaders of the rightwing populist Northern League party met Monday to hammer out strategy for upcoming regional elections as Silvio Berlusconi's Forza Italia urged them to forge a new right-wing alliance.
League leader Matteo Salvini was presiding over the meeting of the Federal Council of the anti-euro, anti-immigrant party also attended by his rival Flavio Tosi, mayor of Verona, who has accused Salvini of trying to kill off the precious autonomy of the Veneto branch of the movement, the Liga Veneta, and threatened to run himself in the regional polls against an official candidate proposed by the party's Milan headquarters.
Also on the agenda was analysis of a demonstration Salvini lef in Rome on Saturday against the government of Premier Matteo Renzi, widely seen as a flop by commentators due to a modest turnout.
Meanwhile Giovanni Toti, a Forza Italia political counsellor, urged the League to join forces with the conservative grouping again.
"I hope that despite the remarks by Salvini at the rally, which I understand, there will be the need to sit together around a table and take decions," said Toti.
"We must as FI and as the centre-right roll up our sleeves to build a recipe for government. It would be crazy not to grasp this chance to return to govern together in the regions where we do already and to build a real government alternative".