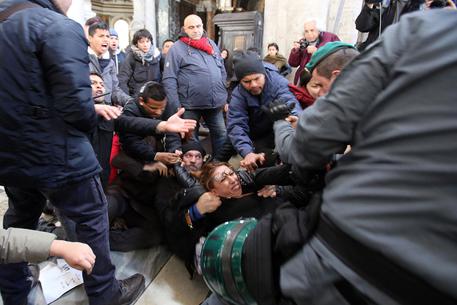 (refiling with correct name of Matteo Salvini in fourth graf) (ANSA) - Rome, February 27 - Police on Friday detained three demonstrators who were protesting a planned Saturday rally by the anti-immigrant Northern League party in Rome. The protesters had entered one of the churches on Rome's central Piazza del Popolo and planned to spend the night there, sources said. A 40-year-old woman was injured and hospitalized when police tried to dislodge the protesters from the church. Northern League chief Matteo Salvini called the protest "delinquent". "I hope the police are ready to...put them in jail and keep them there as long as necessary," he told Radio Padania, his party's radio station.