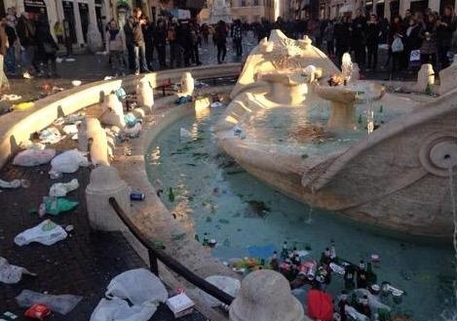 (ANSA) - Rome, February 20 - The Netherlands said Friday that Feyenoord fans must pay for the damage they wreaked on Rome's famed Barcaccia fountain during a rampage ahead of a Europa League match against AS Roma Thursday. The Rome police chief said officers did a good job and that litter and disorder had been preferable to rash action.
Drunken bottle-wielding Feyenoord fans made "around 100 scratches" on Bernini's Barcaccia, damage that was "permanent and irreparable", Culture Councillor Giovanna Marinelli said. The Netherlands "will do its utmost to help Italy identify the culprits so that they can pay" for the damage to the Barcaccia, the Dutch ambassador told Mayor Ignazio Marino Friday, according to a spokesman. "The mayor said 'if you break it you pay for it' and we agree, the culprits must pay, not the (Dutch) government", the spokesman said.
Rome police chief Nicolò D'Angelo said that "litter and disorder" had been preferable to "acting rashly" when the Feyenoord fans ran amok under the Spanish Steps. "I don't want to cause deaths," he said.
"The police did a good job," D'Angelo said.
"If anyone thinks I didn't do one, here I am (to take responsibility)," he added. D'Angelo said 1,800 men had been deployed after receiving contrasting reports that up to 300 or 600 hooligans were on their way. Some 600 of these officers were watching the historic centre, he said. "We did not underestimate nor hide our concern," D'Angelo said. The police chief added that his officers had headed off some 40 AS Roma fans who wanted to "take revenge" on the Feyenoord fans.
Earlier, Marino had said that the Netherlands has refused to pay for the devastation caused by the fans.
"I have spoken to the Dutch ambassador and I asked him - do you intend to pay for the damages?" Marino said. "He said that he did not think that the Dutch government could pay for the new restoration of the Barcaccia.
"Faced with this clear, legitimate refusal by the Dutch government, many Italian companies, institutions and banks called me yesterday evening saying they were ready to pay for the costs of the restoration".
As Rome prosecutors opened a probe into the mayhem, Italian Olympic Committee (CONI) chief Giovanni Malagò said authorities must use "zero tolerance" on soccer violence and "the same measures that were applied in the past against (English) hooligans". European Commission Vice-President Frans Timmermans called for a hard line to be taken with the Dutch followers.
"Hard line against the actions of those who call themselves Feyenoord supporters, but show barbarism and bad manners," Timmermans, a Dutchman and a Roma fan, said on his facebook page. "Rome has been my second home for years. My thoughts are with the injured police officers and the inhabitants of Rome".
Rotterdam Mayor Ahmed Aboutaleb, in a letter to Marino, said his city "reacted with horror" to the news of the "reprehensible behavior of some of the Feyenoord fans", vowing "our collaboration to find the individuals who committed crimes".
Police said 28 fans of the Rotterdam club were arrested and 13 officers injured.
Feyenoord also caused ugly scenes with violent clashes with police on Wednesday night.