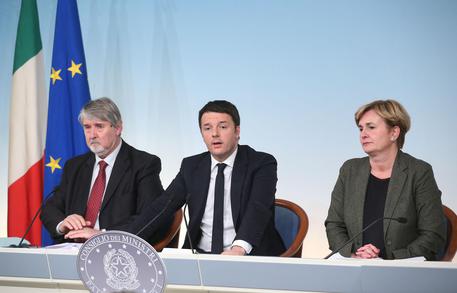 (ANSA) - Rome, February 20 - Italian Premier Matteo Renzi's controversial Jobs Act decrees, praised by international agencies and condemned by unions, were approved by cabinet Friday, ending unstable temporary contracts a tangle of '70s-era rules.
Renzi said his labour reforms, the centrepiece of his efforts to transform a sluggish economy, will help some 200,000 people soon pass from unstable contracts to better employment contracts.
"A generation finally sees its right to have greater safeguards," the 40-year-old premier told a news conference.
"Words like 'health' and 'pension coverage', 'holidays', 'severance pay', and (other) rights enter the vocabulary of a generation that has hitherto been excluded," added Renzi.
The Jobs Act bill had already been approved by parliament and these final enabling decrees, also subject to parliamentary approval, will enact its measures.
It also means businesses will no longer have any excuse to avoid hiring, said the premier.
"We have cut taxes and removed uncertainties," he said.
"Labour has more flexibility in hiring and more safeguards after redundancies," he said.
But trade union federation CGIL, which has fought the changes, said the decrees will not reduce inequality and uncertainty for workers as Renzi claims.
"The Jobs Act is the maintenance of differences and not the fight against insecurity," it said in a statement.
Carmelo Barbagallo, general secretary of the UIL, said Renzi's cabinet ministers were "liars".
"The government promised that they would remove all precarious contracts. But this is not it, they are liars," he said. Renzi's labour reforms to a convoluted system of regulations blamed for discouraging hiring have been strongly endorsed by international organizations, including the OECD.
It said one day earlier that the Jobs Act could prove to be "the real engine of change" for the struggling Italian economy.
Italy's "priority must remain the reform of the labour market, whose excessive rigidity is an obstacle to job creation," the Organization for Economic Cooperation and Development added.
One of the most controversial measures in Renzi's labour law changes Article 18 of the 1970 Workers' Statute so that most unfair dismissals will now be settled by compensation rather than court-ordered reinstatement.
That in particular has been hailed by the national and international business communities as a way of creating jobs amid chronic unemployment.
Sources said it could be next year before a new streamlined contract is in place everywhere, replacing the two outdated types of temporary contracts.
The 'contratto a progetto' or 'contratto di collaborazione a progetto' (co.co.pro.) was introduced in 2003 as a successor to the 'contratto di collaborazione coordinata e continuativa' (co.co.co.), introduced in 1997.
Both forms of temporary contract have been widely used in Italy along with so-called 'false VAT' contracts that enable employers to keep staff on a casual standing.
The new uniform contract is supposed to also provide rising safeguards over three years leading to permanent hires.
New staff are effectively on probation during those three years, when they can be dismissed just as co.co.co's and co.co-pros were often terminated.