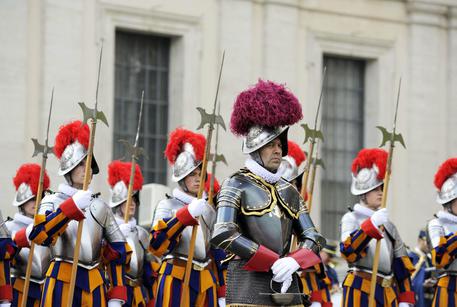 (ANSA) - Rome, February 18 - The commander of Vatican City's 110-man Swiss Guard said his forces are ready to defend Pope Francis from the terrorist militants of Islamic State (ISIS), in an interview with Italian daily Il Giornale on Wednesday.
"Following the terrorists' threats, we're asking the guards to be more attentive and observe peoples' movements closely. We can't do more than that. If something happens we're ready, as are the men of the Gendarmerie," Colonel Christoph Graf said.
Graf was recently promoted from the number-two spot under Colonel Daniel Rudolf Anrig, who left the top post on January 31 after eight years when Pope Francis sacked him in December amidst reports of Anrig being "overly dictatorial".
The Pontifical Swiss Guard has been providing protection for the pope since the 15th century and is Vatican City's de facto military force, while the Gendarmerie Corps are the Vatican City's police and security force.
In a ISIS video released on Sunday showing the killings of 21 Egyptian Christian workers, an executioner said, "We will conquer Rome, by Allah's permission".
Security at the Vatican remains "very high", Italian Interior Minister Angelino Alfano said Tuesday after bilateral talks with the Holy See including discussion of security.