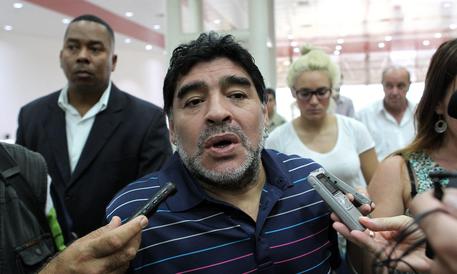 (ANSA) - Rome, February 16 - A tax appeal by former Napoli soccer great Diego Armando Maradona was rejected on Monday by a tribunal that also ordered he pay 15,000 euros in legal costs.
The Naples tribunal's decision, dated January 14, deals with just one of several legal matters involving the Argentinean football star.
In this case, Maradona challenged an October 16, 2013 ruling by the Naples provincial tax directorate which rejected the soccer star's request for cancellation of tax assessments for the years 1985 to 1990.
The tribunal refused Maradona's bid for a tax amnesty that it said he had previously rejected.
Maradona has been involved in a long-standing dispute with the Italian tax authorities, who say he owes them around 40 million euros.
In 2012 he said he was the victim of persecution by Equitalia, the tax collection agency, and was recently charged with defaming the former head of the agency, Attilio Befera.
The dispute regards alleged unpaid taxes on off-the-books earnings in sponsorship and merchandising deals in his late 1980s glory-day earnings with Napoli and interest on that income.
Maradona, who played for the Italian club between 1984 and 1991, is revered in Naples for helping the city's soccer team win two Serie A titles and the UEFA Cup.
The former player had a diamond-studded earring and a Rolex watch seized, among other assets, on past visits to Italy.
Befera was also head of Italy's inland revenue agency, from 2008 to 2014.