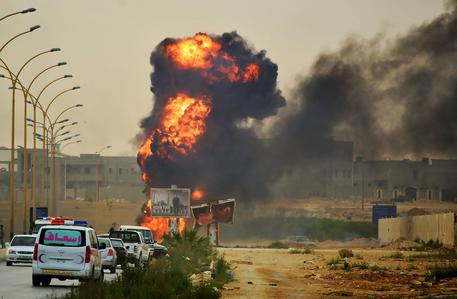 (ANSA) - Rome, February 16 - A group of around 60 Italians returned from Libya overnight after being evacuated because of security concerns about the advance of the Islamist jihadists in the North African nation. The group, including the ambassador to Tripoli, embassy staff and other Italians working in Libya, is set to land on an Air Force jet at the Pratica di Mare military base near Rome on Monday after being taken to the Sicilian port of Augusta by boat. On Monday Egypt launched air strikes against jihadists in Libya purporting to be linked to the Islamic State (ISIS) group after the released a video showing the beheading there of a number of Coptic Christian hostages. In the video, one of the jihadists warned Italy that ISIS was now "south of Rome" and not longer isolated to its bases in Syria and Iraq.
Italian Foreign Minister Paolo Gentiloni has said Italy would be ready to take part in a United Nations-mandated military intervention in Libya, the coast of which is just some 800 kilometers from the southern tip of Italy.