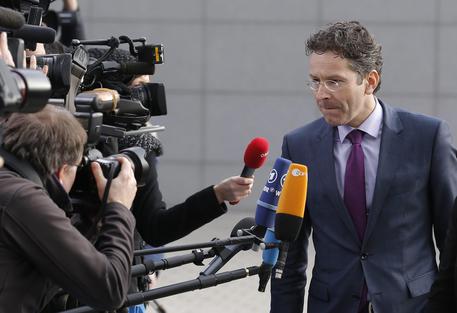 (ANSA) - Brussels, February 16 - Greece must decide by Friday whether to seek an extension of its current bailout program if it wants to continue working with the Eurogroup of finance ministers, Jeroen Dijsselbloem, chairman of the eurozone ministers, said Monday.
"The best way forward would be for the Greek authorities to seek an extension of the programme," Dijsselbloem said after crisis meetings on the Greek situation. If Greece agrees to extend the program, then meetings could resume Friday on future "arrangements", said Dijsselbloem.
"An extension is the only way forward," added Pierre Moscovici, European Union commissioner for economic and financial affairs.
That came after leaders of Greece's newly elected government said that an offer from ministers on its debt issues was "absurd" and "unacceptable".
Premier Alexis Tsipras has proposed a new bailout program that would involve a bridge loan and help in refinancing and repaying massive amounts of debt without the arduous conditions imposed under the expiring plan.
Technical talks were held Friday and Saturday as well as a phone conversation between European Commission President Jean-Claude Juncker and Tsipras aimed finding a new arrangement to replace the current pact that ends February 28.
As finance ministers gathered, Germany's Wolfgang Schaeuble did not sound interested in shifting that country's firm stance on demanding Greece live up to the current deal signed by Greece's former government for a 240-billion-euro bailout.
"The decision is up to Greece," on next steps, said Schaeuble, who in an interview early on Monday with German radio said that the new Greek government was acting "pretty irresponsibly".