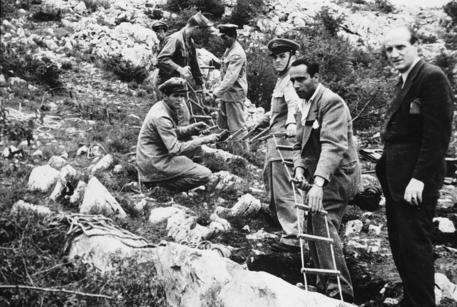 (ANSA) - Rome, February 10 - Lower House Speaker Laura Boldrini urged Italians to remember victims of intolerance and war as the nation marked a Day of Memory for thousands of Italians killed by Yugoslav partisan violence around the end of the Second World War.
"This day is dedicated to remembering, and also as a warning for the present and for the future against any forms of intolerance, war and any attempt to hide the truth," said Boldrini, to loud applause in the Lower House.
Some 15,000 Italians living in the Istrian peninsula, in today's Slovenia and Croatia, are believed to have died in the foibe - narrow mountain gorges - used to execute perceived enemies of the communist government of then-president Josef Tito.
Italians who had lived for centuries in the regions of Istria, Fiume and Dalmatia were attacked by Slovene and Croatian partisans, some in reprisal for Italian occupation of Istria during the war and others blamed for Fascist activities.
The killings creating long-lasting tensions in relations between Italy and the present republics of Croatia and Slovenia which have been accused of dragging their feet over compensation for exiles.
Ceremonies were held all over Italy to remember what ex-premier Silvio Berlusconi called "victims of communist tyranny" including a service at Rome's Altar of the Fatherland where Mayor Ignazio Marino laid a wreath as he spoke of a "horrible tragedy" and denounced "the culture of nationalism that many deaths, violence and pain brought on our continent".
Relatives of three victims of the foibe received awards presented by Italian President Sergio Mattarella in one of his first official events since his election less than two weeks ago.
The Day of Memory was instituted in Italy in 2005.
Last week, Education Minister Stefania Giannini said schoolchildren will be taught about "the tragic events that obliged hundreds of thousands of Italians...to leave their homes, breaking centuries of history and tradition".
Some in the former Yugoslavia have a different perspective.
Slovenian President Danilo Turk in 2009 accused Italy of having an "ethical deficit" in its view of Fascism, which once dominated Italian public life.
Turk said then that a formal act of reconciliation was impossible while some Italian politicians still wanted "to put Fascists and the people who fought against them on the same level".
"We cannot forget the many Fascist crimes during the Italian occupation (of the peninsula) that have gone unpunished," Turk said at the time.
In contrast, Croatian president Stipe Mesic said at the time that he would be in favour of an act of reconciliation that would "honour innocent victims on all sides".