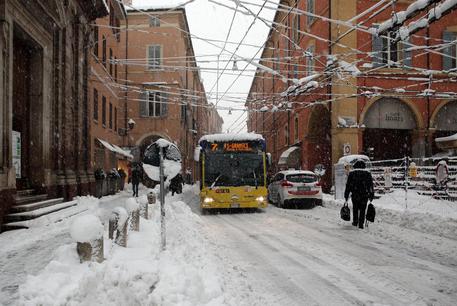 (ANSA) - Rome, February 6 - Heavy snows, biting winds, and low temperatures continued to menace parts of Italy on Friday, closing Bologna's airport and icing highways in the centre and north while drenching the south with rain.
In Emilia Romagna, Piedmont and Lombardy snow was reported, forcing the closure of Bologna's airport, although authorities said they expected that would be temporary.
Rail lines were blocked, causing delays of up to an hour in parts of Italy while traffic was slowed to a crawl around the business capital of Milan.
Schools were closed across the province of Florence amid heavy snow and ice.
Mantua and the surrounding province woke up under a thick blanket of snow and numerous fender-benders were reported in the region where schools were closed in many municipalities. Resident in Senigallia in the Marche region along the Adriatic coast braced for flooding amid high winds and rising tides. Schools there were closed and civil authorities advised residents to move to the highest levels of their homes and park cars as high as possible.