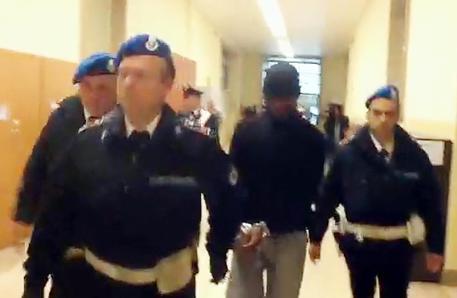 (ANSA) - Milan, February 4 - A Ghanaian migrant who killed three passers-by with a pickaxe in Milan in 2013 acted because his illness, diagnosed as "schizophrenic psychosis", suggested to him the means to express his resentment, appeals judges who upheld his 20-year prison term wrote in their explanation of the verdict released on Wednesday.
According to judges Anna Conforti and Fabio Tucci in Milan, Mada 'Adam' Kabobo did not kill "because he had been defeated by the diagnosed pathology" but rather because his illness prompted him to act in this way to express his frustration and resentment of his difficult living condition Kabobo was first convicted on April 15, 2014 after a fast-track trial in which he was deemed to be mentally semi-infirm.
The appeals court confirmed the ruling on January 20 and upheld a three-year mandatory treatment therapy at a mental health care facility after the defendant has served his term.
Kabobo was judged fit to stand trial in October 2013, though he was diagnosed with "schizophrenic psychosis", after he killed pensioner Ermanno Masini, 64, unemployed 40-year-old Alessandro Carole' and 21-year-old Daniele Carella in an early morning rampage on May 11, 2013.
Kabobo's ability to control his actions was "greatly diminished but not totally absent" and he was sufficiently "able to understand" what he was doing to face murder charges, psychiatrists said at the time.
Two other people were injured in Kabobo's hour-long string of attacks before he was stopped by police.