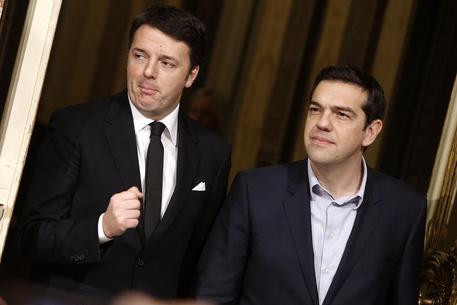 (ANSA) - Rome, February 3 - Premier Matteo Renzi suggested Tuesday that Greece and its new Premier Alexis Tsipras should be able to reach a debt-repayment deal following a meeting where the Italian leader also urged both countries continue economic reforms.
Renzi emerged from his session with Tsipras cracking jokes, but also told reporters that "the conditions exist" to allow Greece to reach an arrangement with relevant institutions on that country's enormous debts.
"I strongly believe there are the conditions (needed) to find an agreement with the European institutions," Renzi said during a joint press conference with Tsipras, who was elected just over one week ago.
He and his Finance Minister Yanis Varoufakis, who met with his Italian counterpart Pier Carlo Padoan on Tuesday, have been traveling in Europe, meeting other leaders.
It was expected that the left-wing Tsipras, elected on an anti-austerity platform, would seek support from Renzi who has also complained about stringent debt and deficit limits set by the European Union.
Greece has been struggling with deep austerity demands and stiff debt repayment terms that Tsipras has vowed to renegotiate.
Tsipras was scheduled to meet in Brussels with Jean-Claude Juncker, president of the European Commission, on Wednesday to discuss Greece's debt problems and austerity terms that Tsipras said have wreaked economic and social havoc.
His party Syriza says the conditions set by the troika - the EU, ECB and IMF - have impoverished Greece, driving up unemployment while not actually reducing a debt of about 175% of gross domestic product.
Renzi, who leads the centre-left Democratic Party (PD), pledged his "greatest possible support, both in terms of bilateral cooperation and in availability for dialogue".
At the same time, Renzi emphasized the importance of sticking to the rules of membership in the EU.
He also stressed the need, in both Greece and Italy, to carry on with structural reforms to create sustainable growth.
"We all have the wish, need and desire that by respecting all the laws, common values will be recognised in Europe," Renzi said.
He also joked that Tsipras has been a "blessing" by taking on the role of left-wing radical, removing suspicion that previous fell on Renzi.
"I spent the first year as a first minister accused of being a dangerous leftist man," quipped Renzi.
"The arrival of Alexis is a blessing!" Earlier in the day, Varoufakis predicted that Greece could "see the end of our financial crisis by June".
Exiting the debt crisis "can be done, provided that in Europe, we all calm down," said Varoufakis.
"We need a bridge agreement that gives us time," he added.
"In Europe, we all want a solution".