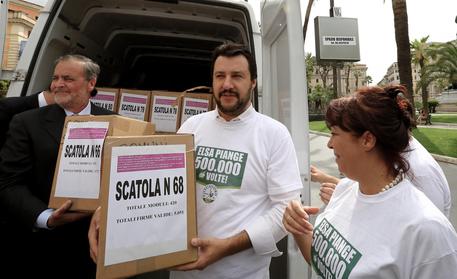 (ANSA) - Rome, January 20 - Politicians were divided Tuesday on the decision by the Constitutional Court to declare inadmissible a referendum on a December 2011 pensions reform, with proponents of a popular vote saying the ruling amounted to the 'death of Italian democracy' and opponents saying parliament was the appropriate place to review the controversial law.
Former Labour Minister Elsa Fornero, who authored the reform, welcomed the ruling as being "positive for the country".
"Now it is for parliament to examine the law if it wants to, calmly and with farsightedness," continued the university professor who served as labour minister under the technocrat government led by economist Mario Monti from 2011 to 2013. "Far from me to say the law is perfect, but a passage through parliament is preferable," she concluded.
Meanwhile Northern League leader Matteo Salvini, whose party proposed the referendum, said that on Tuesday "Italian democracy has died". "You can hear 'go to hell' all over Italy. It doesn't end here... the judges have screwed a sacrosanct right. This Italy disgusts me and I'll fight to overhaul it", said Salvini of the decision not to allow a referendum on article 24 of the December 22, 2011 law. The article raised the pensionable age and requirements for retirement on the basis of the number of years of social security contributions made and created the so-called 'exiled' (esodati), namely people finding themselves unemployed and without pension rights for a number of years. The Monti government addressed the problem of the esodati in subsequent provisions but the problem reportedly persists. Further, opponents of the pension reform claim it makes labour market entry for young people more difficult and penalises female workers in particular. Following the Constitutional Court decision Anna Giacobbe of Premier Matteo Renzi's Democratic Party (PD) and a member of the House Labour Committee called on the government to tackle the issue.
"We have made slight progress on single issues, or parts of issues, in recent months; on others we have hit walls," Giacobbe said.
"It's time for the government to put the matter on its agenda," she concluded. The Monti government pursued the pensions reform as part of EU-mandated austerity measures aimed to combat recession and Italy's massive public debt amid the crisis in the eurozone.