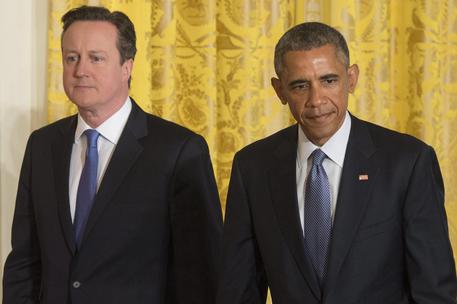 (ANSA) - Berlin, January 16 - US President Barack Obama and British Prime Minister David Cameron on Friday pledged that the UK and the US will share expertise on preventing radicalism and fighting "violent extremism" after last week's terror attack in France.
The leaders held a joint press conference in Washington DC at the end of a two-day conference.
The US leader said that he and Cameron will do everything in their power to help France seek the "justice that is needed".
Obama called Cameron his " good friend", to which Cameron responded "you are my great friend and a friend to Britain." In regard to Russia-Ukraine crisis, Obama said "we agreed on the need to maintain strong sanctions against Russia until it ends", to which Cameron later added "We cannot walk on by".