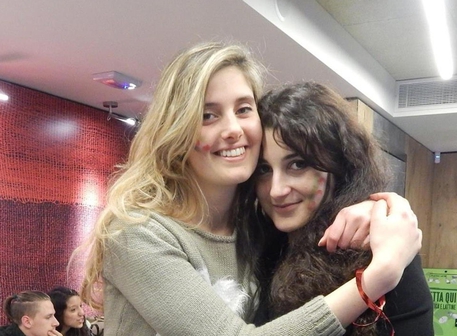 (ANSA) - Rome, January 15 - The premier's office on Thursday confirmed that Italian hostages Greta Ramelli and Vanessa Marzullo have been freed. "They are free and will be back in Italy soon," the government tweeted.
The Lower House broke into long and unanimous applause when Reform Minister Maria Elena Boschi broke news of their liberation.
"Greta and Vanessa freed. The result of Italy's intensive teamwork," the foreign ministry tweeted. Foreign Minister Paolo Gentiloni will be on hand at Rome's Ciampino airport to welcome them when they land later tonight, government sources said. "It's a great joy," said Vanessa's dad, Salvatore Marzullo.
"We are brimming with happiness," Ramelli's mother told the mayor of Gavirate, the town near Milan where the family lives.
"We can't wait to hug our daughter again". The two young aid workers were snatched in the war-torn Syrian city of Aleppo on July 31 last year. Marzullo, 21, and Ramelli, 20, had only been in Syria since July 28 and were working on health and water-related humanitarian aid projects.
The Syrian version of Al Qaeda, Al Nusra, claimed responsibility for the abduction.
The pair appeared in a dramatic video on January 2, breaking five months of silence on their plight.
Speaking English with eyes lowered, Ramella was recorded on the video saying: "We beg our government and its mediators to bring us back home by Christmas". "We are in extreme danger and could be killed" she added. "The government and its mediators are responsible for our lives," she said as Marzullo, holding a placard with the date December 17, looked briefly at the camera without speaking. The two young women were videotaped wearing long dark tunics that covered their bodies and hair, leaving only their faces visible.
Marzullo and Ramelli, both natives of Milan-area towns, co-founded the Horryaty Project bringing medical assistance to Syria, and have volunteered in Africa and India in the past.
Soon after their abduction Milan Mayor Giuliano Pisapia, recalled that the two young women had worked as volunteers helping welcome Syrian refugees arriving at Milan's central railway station.